Invented in Aachen, launched in the Netherlands, used in China and Turkey – now successful in Germany: We are talking about Extreme High Speed Laser Material Deposition, or EHLA for short, a patented and multiple award-winning process developed by the Fraunhofer Institute for Laser Technology ILT in Aachen.

Currently, it’s being implemented at toolcraft AG, one of the most active German pioneers for 3D metal printing and located in a modern high-tech factory in Georgensgmünd in Central Franconia. Since it was founded in 1989, the family-owned company has been proven how innovative medium-sized companies can be.

A decade of experience with 3D metal printing

Since toolcraft has been post-processing 3D parts since 2005, everything spoke in favor of it entering into additive manufacturing. The start into this new world happened in 2011 when it purchased a powder bed system for 3D metal printing. Perseverance was required because the family-owned company only processed orders for around 30,000 Euros with the first machine in the first six months. Today, however, the company reports that its 13 additive production machines are well utilized.

The success proves toolcraft right. Hauck is not allowed to give details and names because he is obliged to maintain customer confidentiality. But one thing is certain: Customers come from a wide range of industries such as aviation, medical technology, energy, mechanical engineering, semiconductor and automotive. In addition to the large machine park in the field of machining (precision components, toolmaking) and plastic injection molding, the company has an enormous range of AM systems for metallic materials based on the processes of laser-based powder bed fusion LPBF, laser material deposition LMD and extreme high-speed laser material deposition EHLA.

The company is particularly proud of two Trumpf systems, as these are premieres: The Trumpf TruPrint 1000 Green Edition and a customized TruLaser Cell 3000. The Green Edition bears the serial number 001; the TruLaser Cell 3000 is the only EHLA hybrid system worldwide to date. While the Middle Franconian company is following the trend toward electromobility with the Green Edition, among other things, in which pure copper and copper alloys such as CuCr1Zr are primarily welded, the new system, which was tailor-made for toolcraft, is intended to close further final gaps in its AM portfolio. „Trumpf has built the ‚legendary jack-of-all-trades‘ for us on the basis of the TruLaser Cell 3000,“says Hauck, pleased.

But why is it a jack-of-all-trades? To understand this, one only has to look deeper inside: The TruLaser Cell 3000 comes standard with a large operating space measuring 800 mm x 600 mm x 353 mm, which can perform two- and three-dimensional laser cutting and welding as well as laser material deposition. The additionally integrated EHLA work head, which increases the previous deposition speed from a maximum of 2.0 to several hundred meters per minute compared to the standard process, accelerates laser material deposition.

It can be used to very quickly deposit layers with thicknesses from 0.05 mm to multi-layer volumes with layer thicknesses of several centimeters on rotationally symmetrical components. To this end, the Trumpf system was equipped with an additional A-axis for components up to 1,490 mm long with a maximum diameter of 320 mm and a retractable 3D laser profile scanner for measuring and positioning clamped workpieces. „However, the use of the scanner enables us to do much more,“ explains Dr. Thomas Schopphoven, group leader of Laser Material Deposition at Fraunhofer ILT. „In combination with suitable software, the geometric data recorded by the scanner can be used to automatically plan the tool paths for applying the material with laser material deposition“.

The Middle Franconian company uses EHLA to repair damaged areas on rotationally symmetrical components and to coat them. The EHLA system has proven itself in the Netherlands and China, among others, where it applies corrosion and wear protection to offshore cylinders several meters long. EHLA coating with metal-bonded hard coatings, for example, is in demand as an alternative to hard chrome plating with carcinogenic substances containing chrome (VI), which in many areas are only permitted after special authorization due to legal directives such as the EU End-of-Life Vehicle Directive and the RoHS Directive.

Fast laser deposition has become a viable option for many industries, not only because it can produce more environmentally friendly coatings, but also because it can work significantly more efficiently. „The message to customers and interested parties is clear: Give us tasks, we will check their feasibility and get down to implementing them, including a laboratory report,“ says Hauck. „There is a lot to do in the area of rollers, for example“. The first orders come from manufacturers of construction and printing machines, for whom the company finishes rotary parts with EHLA. But the 3D printing pioneer wants more. „Often it's about corrosion and wear protection,“ he explains. „But if I have to use expensive carbide, can't I find a hybrid solution instead? I could also take a basic body made of tool steel and then partially finish it with EHLA with an ultra-thin wear protection coating“. This is one of the reasons why toolcraft had Trumpf customize a machine that can handle several laser technologies.

A part made with EHLA also often requires post-processing so as to achieve very low surface roughness – for example, by machining, cylindrical grinding or micro-turning. While experimenting, the 3D printing pioneers were surprised to discover that sometimes it is sufficient to run the EHLA nozzle over the surface again – but with the metal powder supply turned off. In other words: toolcraft has also mastered the still young and new field of laser remelting to improve surface quality.

But what do employees think of the new laser multi talent? Jonathan Krauß, process engineer and system manager for LMD, is pleased about the new possibilities of cleverly combining different materials: „Completely new solutions are created that could not be achieved conventionally“. Krauß works closely with LMD project manager Florian Schlund, who is fascinated not only by the repair possibilities, but especially by the new hybrid projects: For example, by welding two different materials into a new component.

Hybrid manufacturing with robots in sight?

Anyone who has experienced and knows Hauck knows that the positive troublemaker is already thinking ahead: „At the moment, the marriage of robotics and 3D printing is under discussion“. That's why he recently looked at the results of the BMBF's ProLMD research project together with his external consultant Dr. Thomas Schopphoven at Fraunhofer ILT: The combination of laser material deposition with conventional manufacturing processes and robots to create a completely new form of hybrid additive manufacturing.

On the Board of Management: Karlheinz Nüßlein (Human Resources and Production), Christoph Hauck (Technologies and Sales) and Marc Volkhardt (Finance); Chairman of the Supervisory Board: Bernd Krebs. 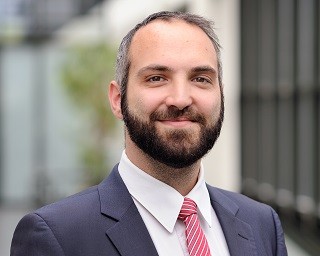